On the date of the perigee Moon the 18-day old waning gibbous Moon will rise around 10 pm local time. The Moon is within the boundaries of Libra the Scales and on either side of the Moon are two stars with interesting sounding names. They are the stars Zubeneschamali and Zubenelgenubi. Despite these two stars belonging to the constellation Libra the Scales the translation of the star names mean “Northern Claw” (Zubeneschamali), and “Southern Claw” (Zubenelgenubi) of Scorpius the Scorpion.

Does our Moon actually go around the Earth as this graphic shows? From our perspective on the Earth the Moon appears to circle around the Earth. However, in reality, the Moon orbits the Sun together with the Earth*
*Click here to read my Scope on the Sky column “The Real Shape of the Moon’s Orbit”. (PDF)

Monday evening the 16-day old waning gibbous Moon will be about 7-8o from the blue-white star Spica in Virgo the Harvest Maiden.

On Friday March 26th the inner planet Venus will have moved into superior conjunction – on the opposite side of the Sun from the Earth. Venus will reappear on the east side of the Sun later next month and start becoming visible in the evening skies over the western horizon.

Saturday March 27th is the annual Earth Hour celebration. Started in 2007 the Earth Hour celebration is a world-wide citizen-powered effort to call attention to our planet’s environment and the need to better take care of our home (our only home).
Earth Hour, although one hour, is an ongoing effort to encourage taking action about climate change as well as the destruction of nature and decreases in biodiversity.
So on Saturday evening March 27th, at 8:30 pm (your local time), turn the electrically powered lights off in your house for one hour. But don’t stop there. Act locally and think globally! Get involved – stay involved.

With lights out this may be a good time to step outside, weather permitting, and take a look at what could possibly be darker night skies with lights off in your neighborhood. Mars is visible high above the southern horizon near the stars of Taurus the Bull, however this year the light from the full Moon will brighten the skies.

Watch this short video story “There Once Was A Sky Full of Stars”.

From the Earth Hour web site:

Our first-ever Earth Hour “Virtual Spotlight”
Over the years, the lights-off moment saw entire streets, buildings, landmarks, and city skylines go dark – an unmissable sight that drew public attention to nature loss and the climate crisis.
This year – amidst the current global circumstances – in addition to switching off your lights, we also invite you to raise awareness and create the same unmissable sight online, so that the world sees our planet, the issues we face, and our place within it, in a new light.

That’s us, and we have a home that is danger from not only climate change, the destruction of nature, and decreases in biodiversity, but our only home is also losing to the demands of an increasing population and its effect on the local environment. At the 8 Billion Angels web site there is information about the effect a growing population is having on our planet. Be sure to watch the video trailer and perhaps consider organizing a community viewing.

Continue learning about our impact on the Earth by visiting the 8 Billion Angels companion web site Earth Overshoot.

Thursday evening March 25th the 12.6-day old waxing gibbous Moon will be about 2-3o from the ‘Heart of the Lion’, the star Regulus in Leo the Lion.

I was looking at this picture from the other evening I got to thinking about the Rovers on Mars would see if they looked toward the Earth?

So as you wonder about that question, here is a look at Mars, by NASA, from last century (I love saying that instead of many years ago!), using data from the first Mars Orbiters. Take a simulated fly over the Martian surface above Mariner Valley and the large Martian volcanoes. Appropriately titled “Mars, the Movie”. 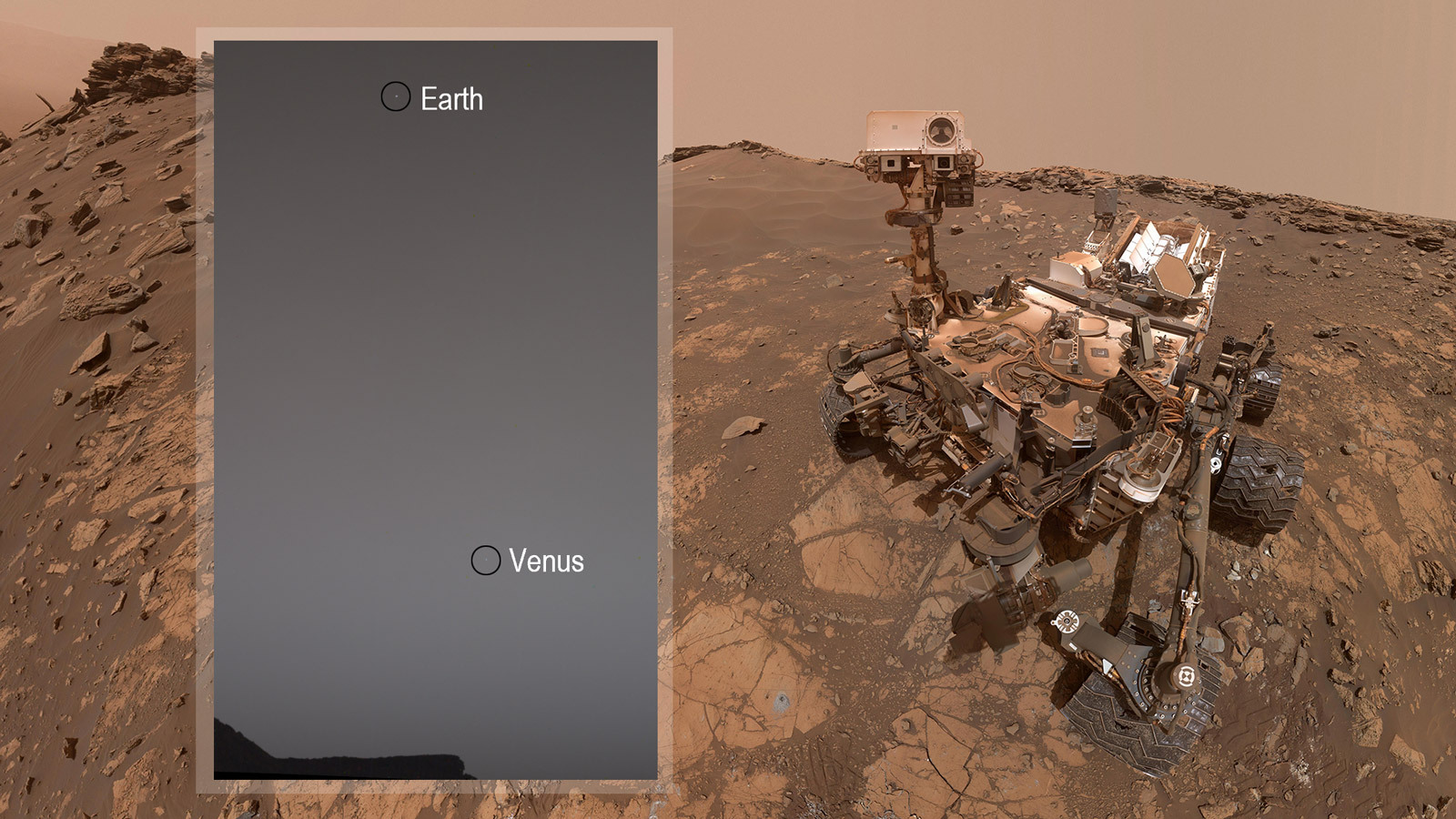 What would Earth look like from the surface of Mars?
Here is a picture of Earth taken by the Rover Curiosity.


Here is what it looks like using Starry Night Pro 8+ software to model the view from the latitude and longitude of the Perseverance Rover landing site in Jezero Crater, (18.4446°N 77.4509°E).
(The viewing location is correct however for depicting the Martian surface my software uses a view at the landing site for the Sojourner Rover.)

About 1 hour before sunrise at Jezero Crater

About 1 hour after sunset at Jezero Crater

This month our Moon reaches a maximum northernmost declination of 25.3o on Monday March 22nd.

Saturday March 20th is an equinox day. While typically called the Vernal or Spring Equinox it is more globally appropriate to call this day the March Equinox as it is the start of Fall in the Southern Hemisphere. The official time for the equinox is 09:40 UT on the 20th which for my time zone is 5:40 am CDT. So for those in the northern hemisphere winter is ending and spring has ‘sprung’ (starts). From a geographical perspective we would describe the Sun as being over the Earth’s equator, and as this graphic shows there would be an equal amount of daylight and night on our planet as a result.

At mid-day on the equator the sun is directly overhead and from that latitude you have no elongated shadow, just a ‘blob-like’ shadow at your feet as this picture of my feet taken at mid-day in Quito Ecuador shows.

Regardless of your hemispheric preference get outside and cast a shadow!

Northern hemisphere spring, Astronomically speaking, is when the Sun reaches the celestial coordinates of 0 hours and 0 degrees as it moves northward along the ecliptic crossing the celestial equator. At this location the Sun is just within the constellation of Pisces the Fishes and not entering Aries the Ram as the pseudoscience of astrology would have you believe.

To learn more about the celestial coordinates click here to read a previous post about seasons and the equinox.

Click here to see the online world sunlight map used to make the day/night graphic at the top of the page.

During a trip to Quito Ecuador to visit one of the exchange student we had hosted, and her family, we spent the day at a Museum on the equator, Mitad del Mundo. I brought along my over-sized protractor knowing in advance that we would be at the museum. So at mid-day I had my wife stand on the equator (yellow line) and hold a string to the top of her head while Cathy, a sister of our exchange student, held the protractor. This was done during the summer so the Sun was over the northern horizon at mid-day and the Sun’s angle above the northern horizon was around 75o.

Here is a short series of hourly pictures taken during the day on the September equinox on the equator in Quito Ecuador at Collegio Menor San Francisco de Quito, a private school that I visited and did the SunShIP project with (Sun Shadow Investigation Project).

Friday evening March 19th look for the 6.7-day old waxing crescent Moon to be about 3o from the ‘Red Planet’ Mars, and about 5-6o from the reddish star Aldebaran in Taurus the Bull. All three should just barely fit within the field of view of 7×50 binoculars.

The 6.6-day old waxing crescent Moon crosses the plane of the ecliptic moving south. This is known as the descending node, one of two intersections the Moon’s orbital path (dark green line) has with the ecliptic.

Conjunction with the Pleiades

The apogee Moon, at nearly first quarter phase, will be above the western horizon and will be within a few degrees from the open star cluster the Pleiades. This should make for a good view with binoculars.

Does our Moon actually go around the Earth as this graphic shows? From our perspective on the Earth the Moon appears to circle around the Earth. However, in reality, the Moon orbits the Sun together with the Earth*
*Click here to read my Scope on the Sky column “The Real Shape of the Moon’s Orbit”. (PDF)

"
Go to the Qué tal in the Current Skies web site.

I believe in Climate Change and the importance of doing something about it.
The Moons of 2021

At the Present Time
it's Our Only Home?

Disclaimer: Any use of my posted information, in any manner whatsoever, will raise the amount of disorder in the universe. Although no liability is implied herein, the reader is warned that this process will ultimately lead to the heat death of the universe.